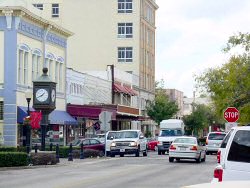 The planning and design of new streets and highways in Seminole County is based upon a roadway design classification which reflects the intended function of the facility.  We have adopted within our Land Development Code the following functional classification definitions which are consistent with those described by the Florida Department of Transportation (F.D.O.T.).

The design and classification of streets and highways should also be based upon a consideration of driver expectations.  The function of any facility, as perceived by the driver, essentially determines the driver's willingness to accept restrictions upon speed, capacity, access or level of service.

The basic classification system consists of the following five (5) components:

Residential - A residential street functions only to serve a local residential community and does not connect any higher classified roadways.

Local - The primary functions of a local street or highway is to serve the adjacent property by providing the initial access to the highway network.  These facilities are characterized by short trip lengths ,low speeds and small traffic volumes.  The design of the networks should be directed toward eliminating through traffic from these facilities.

Collector - Collectors are intended to serve as the connection link for local streets and highways and to provide intra-neighborhood transportation.  The traffic characteristics generally consist of relatively moderate trip lengths and moderate speeds and volumes.  Access to collectors should be restricted to local streets and highways and major traffic generators.  Collectors should penetrate neighborhoods without forming a continuous network, thus discouraging through traffic which is better served by arterials.

Streets or highway may be classified as major  or minor depending upon the traffic volume.

Arterials - Arterial streets and highways are intended to serve moderate to large traffic volumes traveling relatively long distances.   Requirements for speed and level of service are usually quite high.  Access to arterials should be well controlled and , in general, limited to collector streets and highways.  Arterials are used to surround neighborhoods and connect widely separated rural and suburban communities.  The arterial system should form a continuous network designed for a free flow of through traffic.

Freeway - A freeway is a limited access divided arterial street or highway with a minimum of two lanes in each direction.  Access of these facilities is completely controlled and is accomplished by special auxiliary lanes.  The function of a freeway is to serve large traffic volumes traveling long distances at high speeds.   The safety and operational characteristics should be developed to the highest level.