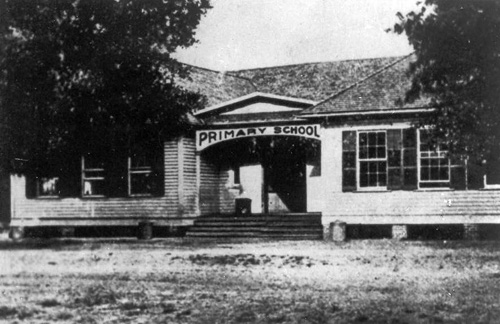 In 1883, two lots were purchased by the County from the Florida Land & Colonization Co. for the purpose of erecting a two room school in which all grades would be taught. The first two teachers were Prof. Coiner, a graduate of Emory College, Oxford, Georgia and Mrs. Angie Tucker of Sanford, Florida.

The school was officially called East Side Primary. Although it was not red, it became known as “The Little Red School House”. Teachers were paid one dollar a month for each pupil per three month term. The term could be at any time during the year at the teachers’ convenience. A total of thirty-three students attended the first term and were called to class by a brass bell with an improvised clapper.

The building was remodeled several times throughout the years until WW2. It then became a County sponsored nursery school. With the advent of audio visual aids in schools during the 1960’s, the building became the County’s lending center for these materials. Later it served as a home for Headstart, a soup kitchen, and a center for displaced women.

The Seminole County School Board turned the building over to the City of Sanford in 1995. In 1998, the City donated it to the Tajiri School for Performing Arts and Academics, founded by Patricia Merritt-Whatley. Today, it continues the original objective of “The Little Red School House”: teaching children performing arts and academics. 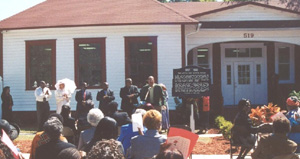 Children of the Tajiri School of Performing Arts and Academics were the focus of celebrations for the Little Red School House Historic Marker Dedication on April 3rd and the Museum of Seminole County History is pleased to present some photographs from this special event. 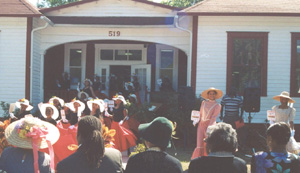 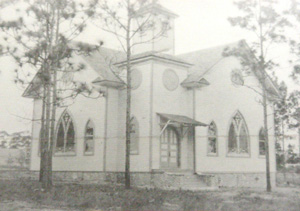 The First United Methodist Church of Geneva was organized November 17, 1877 as the Lake Harney Society of the Methodist Episcopal Church South. The first meeting was held in the log school house west of the Geneva Cemetery, others in private homes.

In 1880 Andrew J. Holder deeded a building site on the northeast shore of Lake Geneva to three Trustees. A church building was erected. Services were held once a month by the Methodists and once a month by the Baptists. In 1912 the Florida East Coast Railroad was completed through Geneva. As the community grew and rail transportation became available, activity became focused at the rail center. The church was no longer centrally located.

In 1909 Mr. H. B. Coffee donated this tract of land for a new church. In 1911, the Methodist Conference authorized selling the original church property and constructing a new church here - 270 First Street. The first services were held in 1912. The building was dedicated in November 1913, debt free.

The church had difficultly surviving after the freezes of 1894-1895, and WW1 when many people moved away. The Great Depression caused the few remaining members to sell two lots on the N.E. corner of the property. When Alice B. Coffee, daughter of the land donor, learned of the sale, she bought the lots, and deeded them to the church with a reversion clause.

The churches, school, post office and stores built near the rail center are still in the center of town.