Prior to 2001, Seminole County did not conduct Mosquito Control. However each of the seven (7) cities conducted their own limited control measure for mosquitoes, relying largely on complaint based adult mosquito control and limited larval control.

With the onset of West Nile Virus in 2001, Seminole County established a contract for Mosquito Control in the unincorporated regions of the County, which included year round mosquito trapping and limited seasonal Adult and Larval mosquito control.

In 2005-06 the former Joint City/County Advisory Committee created and tasked a Stormwater Technical Committee to research and make recommendations to the Joint Committee concerning countywide mosquito control. It was decided that scientifically based, Integrated and comprehensive mosquito control is the best approach to prevent the outbreak of mosquito-borne diseases.

In 2007 a Memorandum of Agreement (MOA) between all seven (7) cities and Seminole County was created and has been approved and recommended by the Joint City/County Advisory Committee, as well as approved and executed by all seven (7) cities and the County, to consolidate and integrate mosquito control activities based on a comprehensive and scientific approach. Coordination and consolidation of efforts results in more effective mosquito control and increase efficiency by preventing repeated treatments.

The MOA was the starting point for countywide integrated mosquito control which has begun an implementation of the program within the Public Works Department. In accordance with staff recommendations and Board direction, the County is phasing in the program over a three (3)-year period (2008-2010). The County utilizes a combination of full-time and seasonal employees to accomplish the mission of controlling mosquitoes, conducting mosquito control activities within the geographic boundaries of the County, to include the cities as it phased out the contracted ground services. Any supplemental treatments by the cities will be coordinated through the County.

The program provides for aerial spraying for adult and larvae control on an as-needed basis in accordance with all applicable Federal, State and local regulations and with the cities' approval when appropriate. As recommended by the Joint City/County Advisory Committee and endorsed by the County and all seven (7) cities and stated in the MOA, each member has identified a representative who serves on an advisory committee to coordinate implementation activities and operations of the Program and to assure consistency of service delivery.

There are three very important diseases that we focus on here in Florida: Eastern Equine Encephalitis, St. Louis Encephalitis, and West Nile Virus; all of these are transmitted by the bite of an infected mosquito.

Seminole County Mosquito Control partners with the Seminole County Health Department in the efforts to monitor these and other potential mosquito-borne diseases through Arbovirus Surveillance including Sentinel Chickens.

Mosquitoes are two-winged flies that belong to the family Culicidae in the order Diptera. There are approximately 3,500 species of mosquitoes. The family Culicidae is divided into three subfamilies: Toxorhynchitinae, Anophelinae, and Culicinae. Worldwide, there are 37 genera of mosquitoes. Mosquitoes live in humid tropics and subtropics, warm moist climates, temperate and cool zones - everywhere except areas that are permanently frozen.

Mosquito eggs can be characterized by two major types: floodwater and permanent water eggs. The females of floodwater species will lay their eggs on a moist substrate – not on standing water. It is a requirement that their eggs dry out for a period of time before they will become viable. Once they have passed through the critical drying time, they may hatch if the area is flooded by rain or by high tides. Permanent water mosquito eggs are laid on the water surface either singly, or in a raft containing up to 300 eggs. The permanent water eggs can not survive if they dry out, and therefore, must be laid in a fairly permanent source of water such as a lake or swamp. The eggs of permanent water species will hatch within about 24 hours. 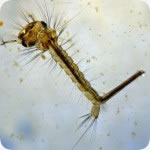 The larval stage of the mosquito is aquatic. The larvae are legless and spend a majority of time at the surface of the water. The larval stage is commonly referred to as “wriggler” or “wiggler”, due to the lashing movements of the abdomen that move them forward, backward, or sideways in the water. They can stay submerged for some time. Feeding during the larval mosquito stage is accomplished through ingestion of particles filtered from the water column or surface, removal and ingestion of surface biofilms, shredding of leaves, and predation of other larvae and insects their own size or smaller. The larvae provide nutrition for the nonfeeding, yet active, stage of the pupa. During the larval stage, the mosquito will shed it's skin, or molt, four times - each of the periods in between the molts is called an instar. Towards the end of the 4th instar, the mosquito larva stops feeding. 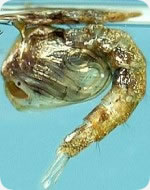 The pupal stage of the mosquito is also aquatic. The mosquito pupa is shaped like a comma and also spends a majority of time at the surface of the water. It is composed of two parts: the cephalothorax (the head and thorax) and the abdomen (tail). During this time the coming mouthparts, legs and wings of the adult are developing in sheaths that are curled around the underside of the cephalothorax. The pupa does not feed as it has no functional mouthparts.

In the adult stage, male and female adult mosquitoes feed on sugars from plants and from other insects that feed on plant sugars. This is the only source of nutrition for the males as they do not feed on blood. The females use the sugar meals for energy and the blood meals for egg development.